Proper technique on the piano (or any instrument) is vital. So many piano method books offer poor technique or no technique at all. There are many great musicians who play well “in spite” of their technique, not “because” of it, as my piano teacher in college used to say.

Here are a list of poor to bad technique I’ve seen over the years and have read in some piano method books: 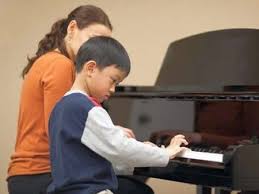 I once watched a keyboardist play in a band with wrists so low they were actually touching the keyboard! He played fairly well in spite of it, but it hampered his ability to move quickly over the keys. Having a low wrist makes the fingers do all the work and may cause them to tire easily. I’ve seen the same poor technique when watching people type at a computer keyboard. When the wrist is lowered, over a long period of time can cause swelling in the wrist. This can cause carpel tunnel syndrome. If the wrists are level or slightly raised, the pressure is taken off the wrist and fingers. This allows the fingers to move more quickly and freely.

#3 Using the wrong part of the fingertip

Here’s a technique almost never mentioned in most piano method books, using the correct part of the fingertip. Having relaxed curved fingers will help. The correct place is below the edge of the fingernail but well above the first joint. There should be no fingernail growth beyond the edge of the finger to avoid playing with a flat finger method. Also the first joint should not bend when playing the piano. Bending the joint causes a delay in playing quickly if needed. It also weakens the ability to play loudly. A good way to strengthen the first joint is to press the fingertips on a hard surface and keep the joint from bending.

Another are where piano method books offer poor technique is what I call rolling the wrists. The more movement with the hands and wrists, the more of a chance to play incorrect notes. It also can hinder the ability to play quickly. Rolling the wrist has nothing to do with the actual playing of the key. It looks good, but in actuality, takes more effort to do it. Teaching this technique to a beginning student only causes frustration when he or she is learning the basics.

#5 Raising the hand too high

This is another poorly taught technique in some piano method books. I recently watched a video from one of the major method books showing an example of playing staccato. She lifted up her entire hand about 3 inches above the keys. This technique makes it impossible to play a quick succession of staccato notes. Good technique should be implemented the same when playing slowly as playing quickly. The proper way to play staccato notes is to keep the wrist stationery with a quick “jerk” with the hand. Only lift the fingers slightly above the key (about 1/8 of an inch), then right back to touching the key. Using this technique, I can play a quick succession of staccato notes easily. The hand should be as still as possible where a coin could stay without falling off and as close to the keys as possible.

The other poor technique I’ve seen is what I call the “hammer” effect. This is where the wrist is stationery but the fingers are raised before playing each note. The best way to play is to pretend the fingers are “glued” to the keys. Keep the fingers as close as possible to the keys. Raising each finger before playing only takes up time and space, making it impossible to play notes quickly. And it’s not necessary to raise the finger, since the weight alone will play the key. Keeping the fingers close to the keys gives better accuracy as well. When the fingers are already touching the key about to be played, there’s almost no chance of playing incorrect notes. The ONLY exception is for playing notes that are heavily accented. In this case, the entire hand should be slightly lifted to no more than an inch to give a stronger emphasis.

#7 Sitting too close and too low

The first thing I had to do when I went to college was to “un”learn how I was positioned. That was the most difficult thing to do after playing incorrectly for 12 years. It’s important to establish correct posture and positioning right from the beginning for a student. Most students (and even professional pianists) sit too close and too low. The knees should be at the edge of the keys for the correct distance (not the thigh like I’ve seen countless times), and the waist level with the keys, sitting tall and on the front edge of the bench. For a keyboard, keyboard, I suggest having a bench and stand to set it on, not a table, to ensure the right position. A small child playing an acoustic piano, put something on the bench to sit on to be at the right height. If their legs do not reach the floor, have them scoot towards the back of the bench with the back of their knees at the front edge of the bench to be at the correct distance. When his or her legs can reach the floor, then they’ll sit at the front edge of the bench.

#8 Slouching at the piano

Playing the piano is great for teaching students to sit tall, which is not only good for playing, but for most other activities in life. It takes pressure off the back and helps when getting older to have good posture. This used to be taught in schools, so now unfortunately only piano students are taught good posture these days.

To summarize GOOD technique is 1) the wrist should be level or slightly raised 2) fingers relaxed 3) using the correct part of the fingertip 4) holding the wrist still 5) keeping the hand and fingers close to the keys 6) sitting at the right position and with the correct posture. This helps in playing quickly and with accuracy, and to play longer periods of time before getting tired. I hope this has helped in your playing and in teaching students. The books at Melody Music Publishers offer great technique information as well as reading music, specific skills, and theory and improvisation! Let’s have fun making beautiful music at the piano!

Kathi Kerr, author and founder of Melody Music Publishers, writes piano books based on her over 30 years’ teaching how students think and learn!